Do you love playing a game of ping pong with friends and family, but you find you’re always on the losing end of a match? Do you want to finally get an edge on your opponent? If you’re serious about learning how to win at ping pong, then these tips can teach you how to become unbeatable and reign as the ping pong playing master.

In order to become unbeatable, you need to focus on mastering different serves. Just bouncing the ball from your side of the table to your opponents won’t cut it. Ball spin serves are the types of serves that the champs use. Putting a spin on the ball makes it more difficult for your opponent to return the ball, resulting in an easy return serve that allows you to finish them off using a big drive. Knowing the type of spin you need to put on the ball when you serve is also important.

If possible, try to watch your opponent as they play someone else, so you can figure out their strengths and weaknesses. Doing so can give you a good idea of the type of strategy you’ll need to use when you’re up against them.

In order to know how to effectively return the ball, you need to know what types of serves your opponent uses the most.

Being on your toes using your best offensive techniques will make it difficult for your opponent to beat you. But you also need to mix up your playing strategy, so you can remain unpredictable. To do, focus on serving the ball with different lengths and spins. This can confuse your opponent, so they won’t know what type of serve to expect next.

You’ll never learn how to be a ping pong master if you’re playing on a cheap table with poor bounce and slower action. You need the best ping pong table that offers excellent bounce and faster playing speed. Additionally, you should also ensure that your table is set up correctly for tournament play. You can learn more about the proper setup in our article on ping pong table dimensions and setup tips.

You should also check out different paddles and find one that generates a lot of spin. Using the right paddle will be very important because it allows you to use the proper techniques and strokes.

With ping pong, you’re either a defender or an attacker. Do you consider your playing style as more passive or aggressive? Do you win more points from your opponent’s mistakes or your own killer shots?

The key to winning at ping pong and being a better player is consistency. Focus on playing with control and try not to worry about hitting the ball harder than you need to. Instead, aim all of your shots at a few spots on your opponent’s side of the table: middle point between the backhand and forehand, wide backhand, and wide forehand.  Your opponent’s prime hitting zone is in the backhand half of the table and the middle of the forehand, and there’s simply no reason you should play balls in these areas. 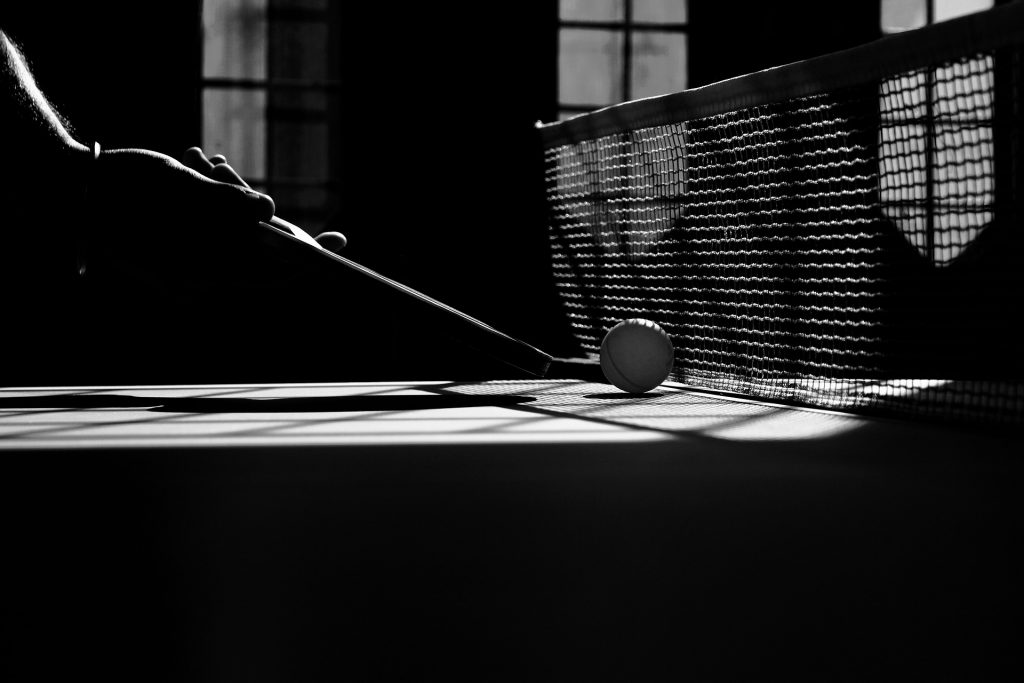 Forcing your opponent to put the ball into the net is probably the easiest way to win a point. If you master generating a heavy backspin, this will be the best way to constantly score points over your frustrated opponent.

With recreational ping pong, the average player is used to hitting balls that have no spin at all or a little bit of topspin. If you throw some heavy backspin into the mix, they’re not going to have a clue what to do.

A push is a great trick to try and it involves slicing completely under the ball. When your opponent is using their basic stroke to try and hit this type of heavy backspin, the ball is going to end up going straight into the net. If you generate enough backspin their shot probably won’t even make it to the net, instead, it’ll shoot straight down. Mastering a heavy backspin will definitely increase your chances of winning a match, but over time, your opponents can learn how to adjust to the varying amounts of spin you use.  In the meantime, you’ll constantly be challenging them.

Creating your own arsenal of tricky serves is another way to guarantee victory over your opponents.

Most amateur players begin with a basic rally serve, because they don’t clearly see how to use their serve to their advantage.

When it’s your serve, this is the time you have total control over the ball, instead of simply reacting to the opponent’s serve. If you’ve already got the hang of using a heavy backspin push, then you can easily use the same mechanics for a backspin serve.

Using this type of serve can allow you to quickly rack up points against an opponent who has no idea how to respond to this type of move. It can also stop attackers from killing your serve.

The fast serve is another great serve you want to practice using. Try practicing this move alone until you’re able to pick up the speed without sending the ball off the table.

Aside from mastering the fast serve, placement is also crucial. Remember the zones we touched on earlier: middle, wide backhand, and wide forehand.

If you’re able to use fast serves in those specific areas, then it will be incredibly difficult for your opponent to make any type of shot, causing them to return poorly or miss altogether.

When it comes to winning at ping pong, everyone will have their own tactics and tricks. However, the ones we have discussed here are an excellent place to start. If you’re a beginner, then obviously, practicing consistently can help to build up your muscle memory and increase your reflex speed. Don’t be afraid to play against opponents who are obviously more advanced. In fact, doing so can be a great way to learn new serves and tricks, so as you develop your own style you’ll be sure to offer your opponents a more challenging match.